My car's sick. It's been off the road for a good few months and doesn't seem to be responding to rest. My new modes of transport are train and/or push bike, depending on how much motivation I possess on the day of travel. One regular rail journey I make is from the Peak District to West Lancashire. The commute has enabled me to observe fellow passengers and document their behaviour whilst confined in a train carriage. 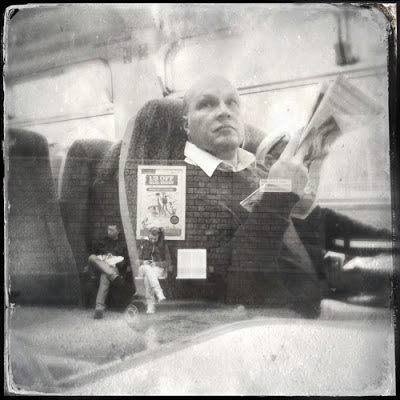 My new travel arrangements coincided with the launch of some new equipment from the Hipstamatic store. The Tintype SnapPak was introduced at the end of 2012 and contains some great new equipment. Bundled with the pak are the Tinto 1884 Lens and two new films, the D-Type Plate and the C-Type Plate. The D-Type replicates the look of an old monochromatic daguerreotype, whereas the C-Type mirrors a cyanotype print complete with hand tinted, washed out colours. The Tinto 1884 lens is, on first impression, a great new (ancient) lens that claims to capture the true essence of your subject with haunting clarity. I haven't as yet put this lens to the test properly but I will be using it more in the coming months. The real star of this pack, for me, is the D-Type plate. The film gives great mono tones which are quite contrasty - very similar to how I used to print Kodak Tri-X negatives back in the days of real film. The distressed black border, scratches and light leak effects, combined, produce a pretty accurate representation of a (digital) daguerreotype. I have found that the D-Type film plate works very well with the Loftus lens. I'm sure it works just as well with other lenses but as the Loftus is my personal favourite, this is the combination I have been using. 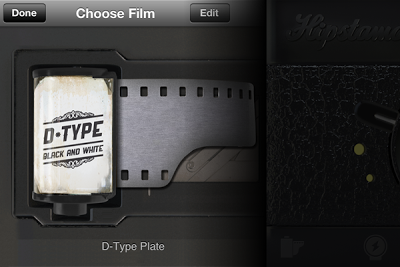 Another new addition to Hipstamatic is the Multiple Exposure Kit. Once downloaded this neat little button appears on the back of 'your camera' in the top left hand corner. If you swipe the button from right to left before making an exposure it sets the equipment up to allow the user to make multiple exposures on top of one another. The finished image is a sandwich of  two separate frames merged into one. It's an interesting technique and, if executed correctly, can add depth and interest to the final digital image.
This new button takes a bit of getting used to, at first, but once you've experimented and found the best way to utilise it, the results can be effective. 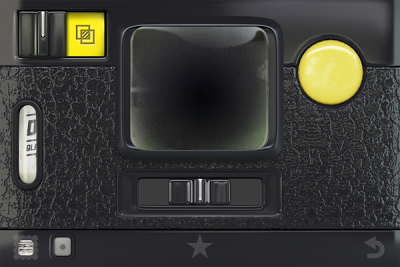 So for this mini project, which is ongoing, I'm using the iPhone 4 with the Hipstamatic camera app, loaded with the D-Type Plate film and Loftus lens with the multiple exposure button switched on. The two key ingredients for image content are unobserved portraiture and a sense of environment. By surreptitiously using the phone to obtain portraits of rail passengers with the first exposure I then overlay this with a second shot, which is often (but not always) the view from the carriage window. Some readers may have a problem with me secretly obtaining portraits of people who have no idea that they are being photographed. I have often questioned the ethics of this practice in the past. Working this way is no longer a moral dilemma for me, I am comfortable with the fact that I am not exploiting anyone. The medium of photography helps me express my own thoughts and opinions, I am not attempting to capture the essence of one individual through portraiture, I am presenting the viewer with my own window of the world. To add to this I am not interested in confrontation or forced expressions (smiles), I am more concerned with the natural behaviour of the unobserved. 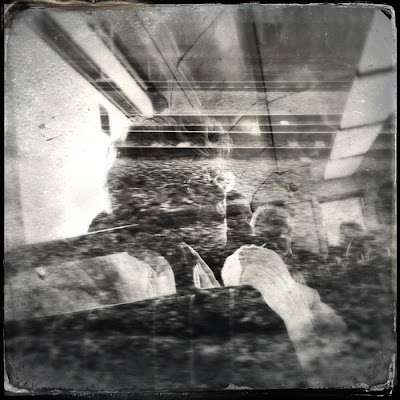 First and foremost I am documenting 21st century rail travel and everything that represents. Personally I'm intrigued with the barriers we put up in certain social situations and the tools we use to avoid one another - laptops, phones, books, newspapers, earphones etc. All act as warning signs and ward off potential interaction. You may be thought of as odd (whatever that means) if you sit down next to someone and attempt to strike up a conversation, whereas if you sat down next to someone, ignored them, plugged in earphones and listened to music it is considered acceptable. How strange?

Some of the results I am getting by employing this technique have been quite pleasing. The overlaying of multiple images adds a ghostly quality to the frames which enhances the, often zombie like, expressions of people. The technique also replicates what can be viewed through the window of a train - it is possible to view the outside world at different speeds and with a quick adjustment of vision view the scene inside the carriage using the glass as a mirror. 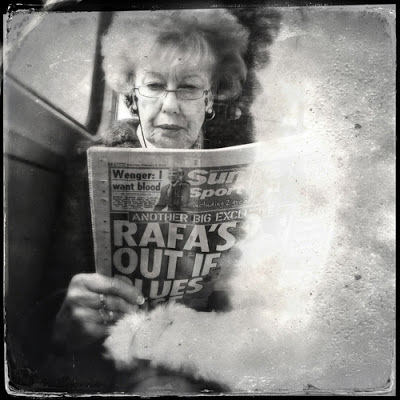