Throughout the month of February I have heard the same noise everyday without fail. My morning ritual starts with the opening of the bedroom window. As soon as the window opens I hear the noise, see-saw, see-saw, see-saw, see-saw. It can be heard above the traffic noise, on the busy road below. From the moment the window opens until just before dusk, this call seems to follow me everywhere. Go for a run, there it is, walk to the train station and the noise continues. Waiting on the platform there is a brief respite...then it starts up again, teacher, teacher, teacher, only this time it sounds more like the high pitched squeal of a classroom snitch. 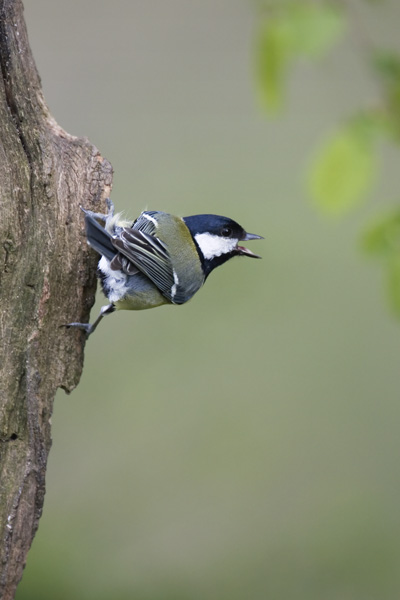 At this time of year the sound resonates across the countryside, a sonic alarm that wakes us up to a new season. One of the first indicators of Spring is the increase in bird song and one of our most vocal songsters is the great tit, Parus major.

It's the male bird that brings all the noise, the regularity of his song increases in response to the lengthening of the days. The call of the great tit is louder than many other small song birds and carries well. Having already paired up with a female, in the Winter months, the male is now calling out to other males, warning them to stay out of his territory. 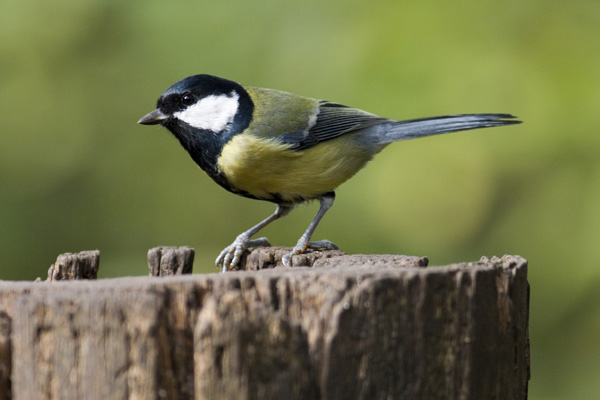 The great tit is the largest of all the British titmice. At 14cm it is considerably bigger than any of its cousins in the Paridae family. It is widely accepted that the larger (16cm) bearded tit Panurus biarmicus belongs to a sub-species of old world flycatchers, personally I think it looks more like a mustachio'd warbler. Either way, the bearded tit is not part of the Paridae family.
The distinguished markings of a great tit make it easy to recognise when out in the field. Its jet black hood has a large cheeky white patch just below the eye. The black head feathers run down the middle of the breast to form a black stripe which continues towards the legs and tail. The stripe splits the primrose yellow underparts of the birds plumage. Upperparts are a mossy green colour. Wings are often described as being dark brown but I have always seen them as a dark blue/grey, edged with white. During flight, a single white, horizontal bar can clearly be seen running across the wing feathers. The outer edges of the tail feathers are white and can also be witnessed when the bird is flying. Unlike all the other British tits, the male and female great tits can be differentiated by their markings. Male birds are, often, slightly larger than females. The black areas of plumage on the males have more of a sheen to them, in contrast to the matt blacks of the female. Overall the male birds plumage is much more vivid than the females, especially during the early Spring months. By far the biggest difference, between the sexes, is the black stripe that runs down from the birds bib and through the middle of the breast. In males this band is much thicker and extends outwards towards the legs. 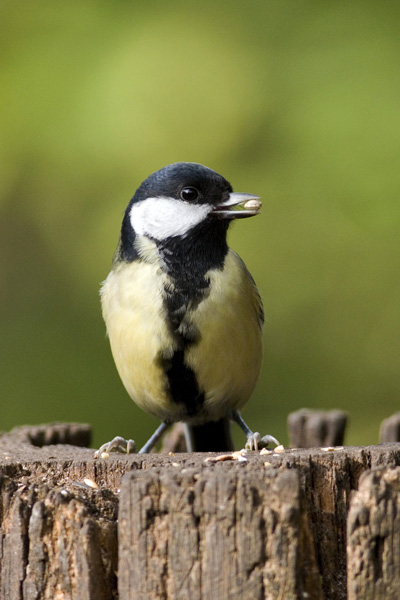 At this time of year pairs are prospecting for potential nest sites. If you have a nest box in your garden with a suitably sized hole (28mm) you may well get a pair of great tits moving in. If no natural nest holes are available the great tit will readily accept artificial sites. Bird nest boxes are relatively easy to make, plans for a standard box can be downloaded, in pdf format, from the RSPB. If you don't have the time to build one you can pick them up, ready made, at any good garden centre. Many birds will have already selected a potential nest site but if there are a shortage of suitable sites in your area the introduction of a nest box will, almost certainly, attract attention. I put a box up last weekend in a rural garden that attracts a large amount of small song birds. After securing the nest box to a tree trunk I walked indoors to observe through a window. Within minutes the box was being investigated by three different species, one of which was the great tit (blue tit and nuthatch, being the other two). 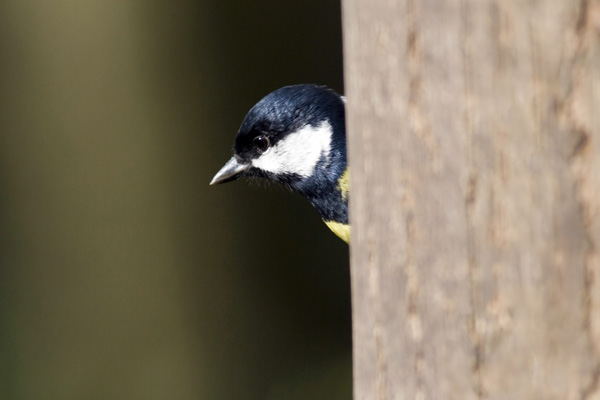 If you have an interest in wildlife and don't have a nest box in your garden, why not put one up this weekend and see what happens, you may get a cheeky little great tit taking up residence.
Posted by Neil Atkinson at 19:10