This text is a follow up to my earlier post, Shooting with the Hip which I published on 01/04/2012. If you're not familiar with the Hipstamatic application I recommend you read that article first. In the post I stated that, 'I really had to make a concerted effort to shoot using Hipstamatic and not the iPhones regular camera'. This was partly due to the fact that the Hipstamatic 'camera' doesn't feature Auto Exposure/Auto Focus (AE/AF) lock which I found limiting. The other reason I struggled to embrace the app was because I couldn't find a film and lens combination that really impressed me.
Shooting with the Hip wasn't exactly scathing in its assessment but, having re-read the article, my opinion of the app was lacklustre. Since then I have been shooting almost exclusively with Hipstamatic and my opinion has shifted somewhat. I shall now attempt to redress the balance. 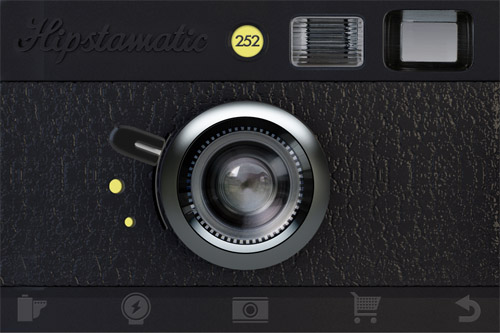 With the recent release of the Wicker Park HipstaPak (more on this later) there are now 12 lenses and 14 film types available to Hipstamatic users (more if you have some of the earlier and now discontinued equipment). This gives a total of 168 possible film and lens combinations.
I have now downloaded all the available HipstaPaks and have been experimenting with the many different lens and film combo's. Considering the choice is so extensive the number of partnerships I use regularly, seldom reaches double figures.


As previously stated Americana and John S lenses paired with Blanko, Blanko Freedom13 and BlacKeys SuperGrain films were my preferred choices. Of the new downloaded paks one, in particular, stood out  -  The Foodie SnapPak. 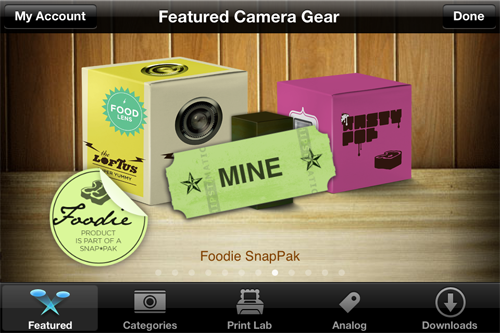 The Foodie SnapPak contains the Loftus lens, DC film and the Tasty Pop flash (I never use the flash). The blurb in the Hipstamatic field guide informs us that the lens was inspired by the food photographer David Loftus (he's the guy that shoots all the 'pukka' food for Jamie Oliver's books). The guide also gives the following information under the heading of lens qualities.
'Sharp in the centre, then goes blurry in the corners and edges like an old minuscule lens or a tilt shift lens. Colours are fairly vivid, without much of a colour shift.' This is an accurate description. The colours are a little over-saturated (which I like) and the cast is minimal, with an occasional bias towards magenta.


The pak's film, DC, continues the 'Foodie' theme and is named after Domenica Catelli, an American chef who has, 'influenced the way millions of (American) families eat with her tasty and healthy approach to cooking.' The film is a perfect companion for the Loftus lens. If shooting in colour this is my preferred partnership. Once again the Hip guide is spot on, describing DC's tones as 'delicious' with a 'slight gloss'. I love the fact that everything is enclosed by a thin black border, it reminds me of printing 120mm roll film from a filed down neg carrier (those who have printed in a 'wet' darkroom will appreciate this memory).


The combination of Loftus lens and DC film are clearly geared to photographing food. However, the partnership is a solid all-rounder and copes admirably with a whole range of lighting conditions. I am especially fond of the subtle tones this combination reproduces when photographing muted colours.


I do still use other combinations of film and lens depending on subject matter and lighting conditions. My preferred choice for shooting mono work is still BlacKeys SuperGrain film through the Americana lens. I have experimented using the same film with the Loftus and John S lenses and although I like all the combinations the Americana lens just edges it for me personally.


Even with so many different combinations of lens and film, I find myself willing the release of the next HipstaPak so that I can experiment further. This is possibly a tad obsessive and more than a little geeky but you've got to get your kicks where you can. Imagine my excitement at the release of the all new Wicker Park HipstaPak. The pak contains the Lucas AB2 Lens, the Jolly Rainbo 2X Flash and the Damen camera case. Rather disappointingly there was no film with the pak and as I don't tend to use the flash much, that just left the lens to test. The new case, however, looked lush with its antique wood and metallic body (bit strange describing something as lush when it only exists 'virtually', it's not like I could smell the 'oakiness' of the wood - it just looked good). 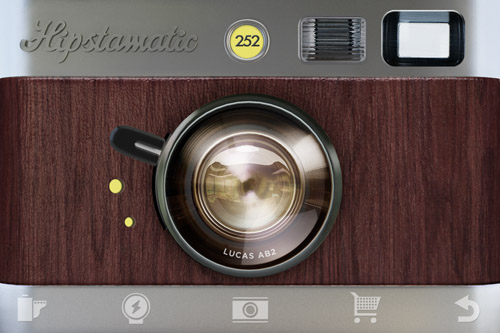 I was looking forward to testing out the new lens as I liked the sound of the field guides description; 'Dunked in a fine golden brown glow, the Lucas AB2 produces amazingly rich prints.' Initial tests and subsequent results didn't exactly bowl me over, so I persevered with several different film types. All the tests I shot with this lens using various films didn't look as good as my tried and tested favourite, Loftus with DC film. There is, undoubtedly, a richness to the finished print, predominantly in darker/foreground areas, but the lighter areas within the frame, such as blue sky/white clouds, look hugely under-exposed.

Personally I prefer good definition between white cloud and blue sky. The Lucas AB2 does not give you this, these areas get merged to produce a light, tea-stained brown. Even with interesting subject matter, great light and good composition skies can look washed out. If photographing scenes with hugely contrasting shades of brightness and darkness, certain lenses/films perform better than the AB2. In the images above the combination of John S lens and DC film manages to give an overall balanced exposure, whilst maintaining good definition in the sky. Compare that with the lack of definition in the image on the left, shot using the Lucas AB2.

I have continued to use the Lucas AB2 and I make a point of switching back to it when using some of my favourite combinations, just to see what it can do under different lighting conditions. I have recently found that if you are shooting areas predominantly made up of sky, with the intention of rendering foreground subjects in silhouette, the lens produces some good results. You can be shooting at noon on a bright sunny day and the effect you achieve replicates a time later in the day (late afternoon/dusk). This can add atmosphere, as the frame below illustrates.


Histamatic is a fantastic app but it does take a little getting used to. The key is to experiment with different film and lens partnerships until you find something that appeals to your own personal taste. My rather tepid opinion of the app in Shooting with the Hip was simply down to the fact that I had not found my own perfect combination. Once I did, I started using Hipstamatic more frequently. It has, subsequently, become my favourite iPhoneography app, with Loftus (lens) + DC (film) my preferred combination.
Posted by Neil Atkinson at 13:15